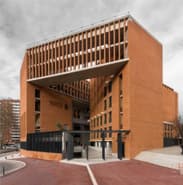 Located in the Occitanie region in the south west of France, Toulouse is the 4th largest city of France by its population. Founded by the Romans in the 2nd century BC on a site already occupied by Celtic people, Toulouse became the capital of the Wisigoth kingdom for much of the 5th century, was the seat of power of the ”Raymond” dynasty after the 11th century, and was included in the French king’s domains after the Crusade of the Albigenses in the 13th century. After a boom time in the 15th and 16th centuries due to the pastel (blue dye) industry, it became a some what sleepy town, connected to the Mediterranean by a canal in 1680, and the location of Wellington’s decisive victory against Napoleon’s armies in 1814. A major site for the military industry in the late 19th century, it started producing aircraft during World War One, some of which were put to use by local manufacturer Latécoère to found what became the first postal, then passenger airline from France to Africa and South America; Antoine de Saint-Exupéry (of Little Prince fame) was one of their pilots. In the 1960s the French government concentrated a lot more airand space activities in the city, which is now home to the headquarters and major assembly lines of the European consortium Airbus, and the offices of the French space administration.

Toulouse in the Occitanie region, France

With a total of 118 000 students and more than 9000 researchers, Toulouse has been ranked first student city in France by the magazine ”L’étudiant” in 2019-2020. Toulouse has three universities:

The workshop will take place in the Toulouse 1 Capitole premises which are very near the Capitol square (city center),more precisely in the brand new Toulouse School of Economics building inaugurated in November 2019. Free bus + metro tickets will be distributed for the duration of the conference.

How to get to Toulouse

Toulouse-Blagnac international airport is located 8 km west of Toulouse and there are buses as well as tramways to get to the city center in 20 to 30 mn. The Toulouse train station is right in the center of town and with the metro, one can be at the university in 10 to 15 mn.